Every year Stack Overflow conducts a developer survey to get the pulse of their community. The questions range from technologies, salary, school and more. Over 65,000 people filled out the annual survey this year.

Of the 38K professional developers that reported race, 70.7% are white. If I look around the companies I’ve worked at, this number actually seems pretty low. 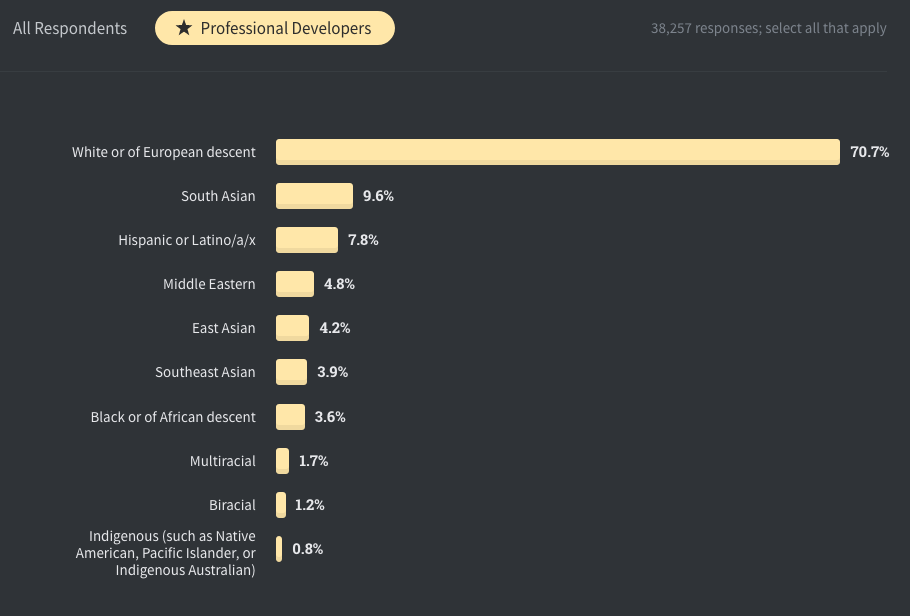 Age is often overlooked in diversity numbers, I am really glad Stack Overflow took the time to ask this question. Often times older developers get judged by their age in the interview process. With 38K responders 68% report being between the age of 20 to 30. 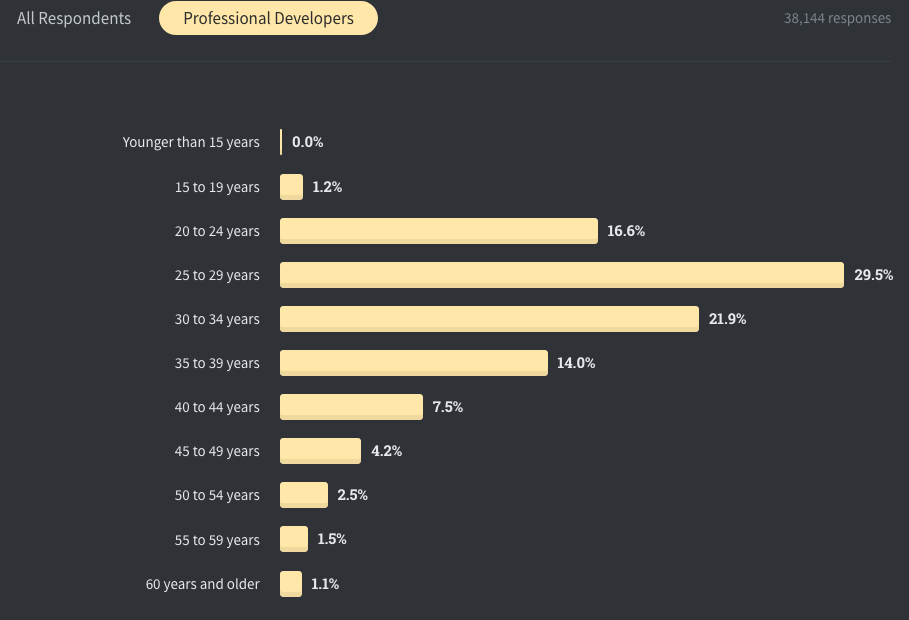 An interesting stat I saw on the experience by gender section was that the population of Women responders report higher from 0-10 years, which might indicate a surge in the effort to hire Women engineers.

Overwhelmingly the story this data tells, is what we see with our own eyes in the offices we inhabit. The majority is young, white, straight men with less than 10 years of experience in their fields.

We must do better at making tech an equal field for all people to contribute. Study after study show the benefits to having a diverse workforce. Expand the backgrounds your ideas come from, incorporate design adjustments that affect a group that isn’t a main population. Reduce employee turnover and inspire creativity.

The average age of writing your first line of code, broken down by country is pretty interesting to me. It shows that the majority of responders start around 15/16 years of age. Where in Germany its actually younger at 14 and India, it higher toward 17. 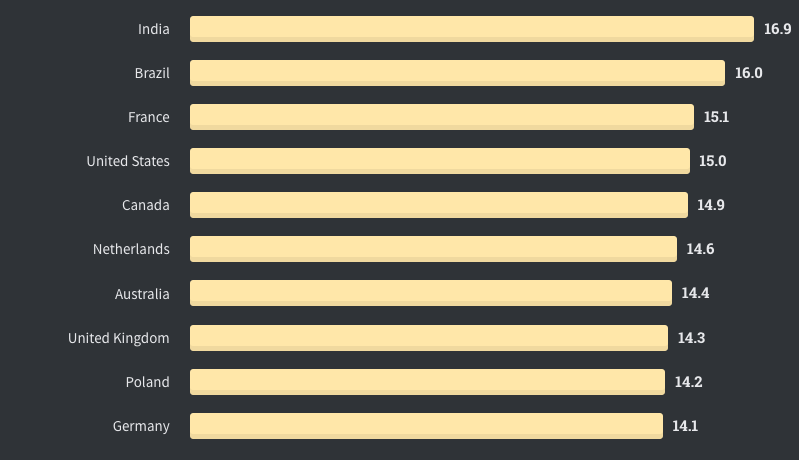 I think this trend is moving younger as STEM programs are being introduced into schools as a standard part of the curriculum. I don’t think the kids writing and solving coding problems in school have quite reached the age where they are filling out anonymous forms online yet. I would imagine this metric to skew lower in the coming years.

Javascript and jQuery continue to be the most used languages and frameworks. MySQL and Linux round out the database and platform side of most used. To me this isn’t surprising due to the fact of how attainable these technologies are, the documentation and the community support round each of these.

AWS is growing in popularity on the platform side, with more than a quarter of respondents reporting using it.

Python is still the most wanted language, but Rust maintains the top spot for most loved. I feel like it was only a few years ago when I first heard of rust, so this stat is somewhat surprising to me. With 86.1% of respondents reporting writing in the language they love.

Frameworks, React and Vue round out the second and third place spots. I think these will continue to gain traction and eventually overthrow ASP.NET as the top loved framework as we move more toward SPA and web based applications.

One area I found pretty fascinating is the Years Coding Professionally section. With over 57k responses of people who are on Stack Overflow, 39.6% show less than 5 years.

Combined, engineers responding to this survey, about two thirds (66.4%) have been coding less than 10 years. This is amazing to me, and a testament to more and more material being available online. Such resources as Stack Overflow, or personal blogs, udemy and others that have courses anyone can take and become a software engineer.

10 years ago, the iPad was released. Snapchat wasn’t born. Instagram was an infant. Lyft was 2 years away from becoming a company. Even slack launched in 2012.

Only 3% of responders reported to have 30 to 50 years of experience. Thats about 2k people. In the late 70s Microsoft and Apple were just getting started. The mid 80s brought the NES, and Adobe Illustrator 1.0 was released in 1887.

I think the people who complete a bootcamp instead of school might fall into the secondary school and some college with no degree classes, which makes up about 21% of the response.

These stats combined with the question of is formal education important show that respondents mostly believe a school is important for the roles they have. But 16% think its not at all important and not necessary. This pretty closely matches the number of folks who make up the high school and some college/no degree group.

When it comes to continued education, 72% of the 46K professional developers reported they learn a new technology at least once a year, up to every few months. Given the age an experience level we’ve gone over above, this doesn’t surprise me. Early career engineers are going to learn many new platforms and technologies as they begin and continue as they hop to new teams and companies.

A number I was kind of shocked by was the number of people who reported working overtime somewhat frequently. Overtime is anything over the formal time expectation of the role. In the US that’s commonly 40 hours a week.

About 11% say they never work overtime. Good for them! 15% say they work 1-2 days a year over their normal hours and the rest report more than a few times a month to a few times a week. Thats a hard pill to swallow, as it leads to burnout much quicker.

This is the first year Stack Overflow has tracked this question, and I would love to keep an eye on this stat over time. I believe work can be done in the hours allotted in the day. You must find your work-life balance.

If you are an engineer that wants to promote change in the culture and the industry, please fill out these surveys. Your company may have a similar survey and by providing agencies data points to make changes, changes can happen much sooner.

You can find the entire report from Stack Overflow here and the previous years reports are also available online too. You can also find some information about how big tech companies are doing on diversity numbers here, spoiler alert, it’s not great.